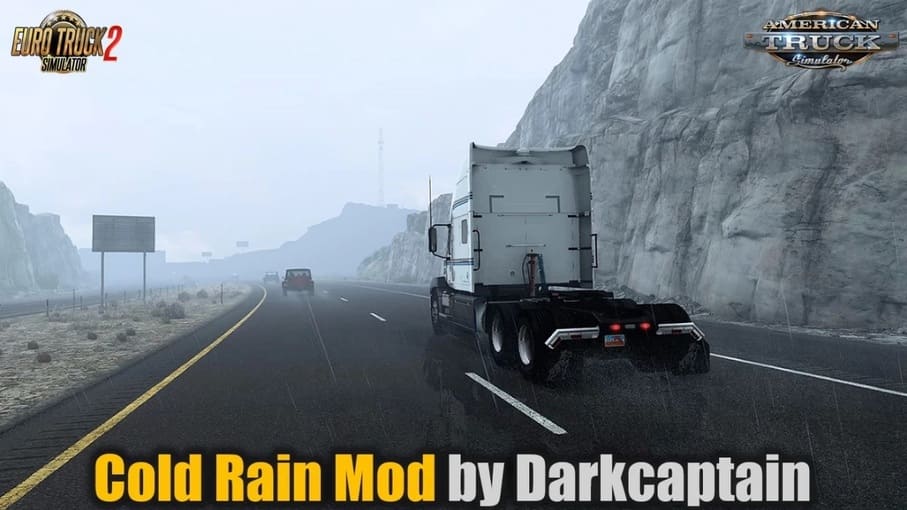 Cold Rain – this mod adds a new rain effects with their own sounds for ETS2/ATS players. A
colder, wetter and “stronger” rain, maybe it’s a good combination with the fog enhancement in
1.40 version. Some textures are based on the old Mod by AlexeyP

Features Cold Rain:
– Textures of raindrops for windows and windshield have been changed
– Increased amount of raindrops from inside the cabin
– Rain textures have been improved
– The effects and behaviors of the drops on the windshield and windows have been changed
– The texture and effects of the water particles on the wheels when the asphalt is wet has been
changed (affects all vehicles, traffic included)
– Realistic rain sounds, such as drops falling in the cabin and the sound of rain with the
outside view
– High quality and greater variety of thunder sounds (more than 15 different thunders sounds)
– Must have high priority in Mod Manager. ‘Cold Rain’ on top (ABOVE) of Weathers/Graphics, Maps
and Sound mods.

Changes in v0.2:
– The number of raindrops on the windows has been considerably reduced (better visibility on
windows);
– Reworked textures of raindrops;
– Slight changes in the behavior of the raindrops;
– FMOD: Full compatibility with Sound Fixes Pack by Drive Safely;
– FMOD: The sound of rain falling in the cabin has been improved (sound level, better transition
for different intensities…);
– FMOD: Some improvements in thunder sounds (sound level, better fading effect, added some new
sample…);
– Includes add-on: Increased raindrops on windows.

Note: The thunder will be heard in an interval of between 1.5 and 5 seconds when seeing the
‘flash’ (lightning), simulating as in reality.

Compatibility & Requeriments:
– 1.40.x version. No errors in game log.
– Support for FMOD Sound System.
– Compatible with all DLC’s and it should work with Mods Maps
– Tested with SCS default weather (1.40 version)


Remove all Base Traffic by ETS2 Indian Mods for ET

Remove all Base Traffic by ETS2 Indian Mods for ET

XP & MONEY CHEAT MOD FOR ETS2 work in all versions